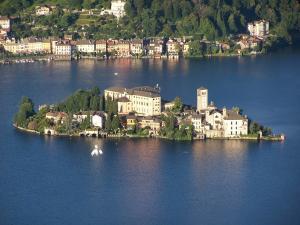 The history of the Cusian lands is ancient.

This corner of Piedmont, squeezed between the irrigated Novara plain and the first curving of the hills that slowly turn north into the mountains of Ossola, saw the first realization of the aggregated human presence well before the assertion of Roman power. The first inhabitants of St Giulio Riviera were probably the Ligurian, who over time  suffered a Celtic influence. A common destiny for all the Novara area: the inhabitants of the Riviera were then conquered by the Gauls and at last invaded by the Romans.

During the Roman domination, the Cusio was used above all as a military outpost. The first written traces relating to the island of St Giulio refer to a couplet of Ennodio, bishop of Pavia, which mentions the Castle built on the island of the bishop of Novara, Onorato. Paolo Diacono, instead, in his “Historia Longobardonum” tells the story of Mimulfo, Duke of the island of St Giulio, who betrayed his King Agilulfo, selling himself to the Franks. Agilulfo condemned the treacherous Duke to be beheaded, and his corpse was found buried in a column basement at the end of the seventeenth century.

Other sources are of archaeological nature. Of great interest, for example, a tombstone on which the epitaph of the bishop of Novara, Filacrio (died in 553), was engraved: plus other traces of the foundations of a religious building dating back to the fifth century, and  another tombstone with engraved peacocks and palm dates from the beginning of the 5th century.

These witnesses are rich in points of contact with the legend  of St Giulio and St Giuliano, the two Greek missionaries who evangelized the area, according to the tradition, towards the end of the 3rd century. 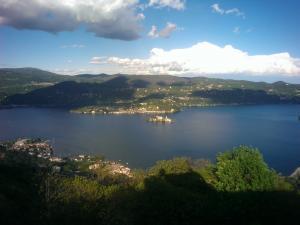 The island was therefore the venue of a Longobard duchy, then part of the Carolingian Empire. In this phase of its history, the Cusio legally made part of the committee of Pombia, following its fate.

In the second half of 9th century, with the dissolution of the Carolingian Empire and the emergence of the network of feudal lords, often fighting each other to gain supremacy over Italian territory, it was the bishops who, moving with skill, acquired power and authority taking advantage of the collapse of the Empire to fill the  power vacuum  that had been created.

On this scenario took place one of the most “popular” historical events among those occurring in the Cusan territory. In 950 Berengario II and his son Adalberto fought against the bishop and the Church. In 957 we find Berengario in the island of St Giulio transformed into a fortress when, fighting against the German Emperor Otto I for the throne of Italy, he locked himself up with his son and suffered a two-months siege by Litolfo, son of Ottone.

In 962 Ottone himself moved against Berengario, defeated but not tamed, who went to barricade himself in the Rocca of St Leo in the Duchy of Spoleto, while on the island of St. Giulio Queen Willa landed with the treasures taken from the Royal Palace of Pavia, and had the fortifications restored. Willa surrendered after a historic siege. A siege passed into history also because in those long months was born Guglielmo da Volpiano. He was a  monk of the Benedictine order, abbot of forty monasteries that he reformed and rebuilt,  bringing  a new breath to Medieval Europe. It was in the Middle Ages one of the most important figures of religious life and artistic culture of the Christian West at the turn of the year one thousand; he was at first a monk at Lucedio (Vercelli), then a friend and follower of the abbots of Cluny, and at last in Dijon where he built one of the most important Abbeys of the first Romanesque, that of St Benigno. 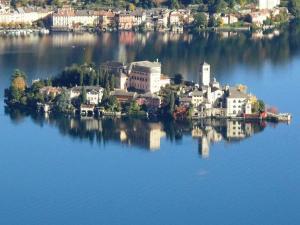 At the end of the siege Ottone proved to be particularly mild with the defeated and with Queen Willa, leaving her free to join her husband. Ottone, with a diploma dated 29 July 962, donates two courts with various farms, mills, servants and various rights to Agrate and Barazzola.  Those were the beginnings of the temporal power of the bishop of Novara on the land of St Giulio: a power that has been recognized by the Emperor only in the early years of the new millennium.

It was 1219, and from that year we can date the rise of the Episcopal state that lasted until the end of the XVIII century, with a revival after the Congress of Vienna and the definitive cession of power to the Savoy in 1817.

Before going on to become an integral part of the future Kingdom of Sardinia, the Cusio knew the French and then the Austrian domination. With the deed of transfer to the Savoy, in exchange of an annuity, the bishop completely renounced the feudal and jurisdictional domains, but kept the castle and the palaces of the island maintaining the title of Prince.

The construction of the imposing building on the island dates back to the mid-800; it was a seminary in the beginning and today it’s site of the Benedictine monastery “Mater Ecclesiae”.

Any cookies that may not be particularly necessary for the website to function and is used specifically to collect user personal data via analytics, ads, other embedded contents are termed as non-necessary cookies. It is mandatory to procure user consent prior to running these cookies on your website.