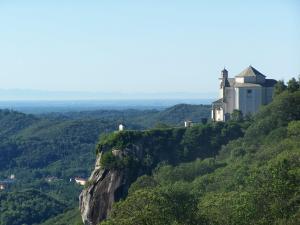 The municipality of Madonna del Sasso is located on the western shore of Orta Lake. Its name derives from the homonymous Sanctuary, built between 1730 and 1748 and which stands on a granite spur directly above the lake. The Municipality is composed of the fractions of Artò, Boleto, Centonara and Piana dei Monti, and took the name of Madonna del Sasso in 1928.

With the Royal decree n. 174 of 29 January 1928, “Vittorio Emanuele III, by the Grace of God and the will of the King Nation of Italy”, declared that the “municipalities of Boleto and Artò, in the province of Novara, are united in a single Municipality called Madonna del Sasso with capital Boleto.”

However, the union of the two Municipalities has created many problems. Indeed, Colombara writes: “ the disappearance of the two local autonomies, punishing Artò to a greater extent with the loss of the municipal seat in favor of Boleto, caused resentment among the fractionists, which resulted in public protests during the first months of unification.

Even today, especially the elderly underline this bureaucratic forcing, which didn’t respect the originality of the old municipalities, nor didn’t it safeguarded the dialectal particularities, a topic highlighted by various witnesses as an element of distinction and respect for one’s roots.[…]

“the municipal territory is dominated by the Briasco and Avigno mountains, with variable altimetry, which places the Municipality in the so-called “middle ground”, that is not exactly in the mountains but not even in the hills. The fractions already existed with certainty towards the year one thousand, with precision in 962 AD, forming part of the Episcopal fiefdom of Novara, like the entire Riviera of the Lake. For many centuries the male population had to emigrate to Switzerland and France to find work; cooks, shoemakers and masons in particular.

About the work activities, writes  Colombara: “[…] the economic activities have changed considerably in the last hundred years; in the early decades of the twentieth century, due to the end of the cultivation of local quarries, the work of stonemason as well as that of bricklayer and woodsman has been reduced.

The charcoal burner, a typical profession of these villages,  disappeared, while shoemakers and innkeepers, unlike cooks, were inconsistent in number. In the aftermath of the last World War the workers in the agricultural sector suffered new declines.

The number of employees in the industrial sector grew instead. […]”

The agricultural cultivations did not allow a high state of well-being, confirming the state of poverty of the population. Hay was harvested and vines, vegetables, hemp spelled and potatoes were grown, and walnut oil was produced.

The growth of hay, however, was slowed by the climate, which allowed only two cuts per year. To make up for this lack the foliage was collected and, after having dried, it was given to goats, sheep and cows.  The highest remuneration derived from the milk, also thanks to the production of butter and cheese. In addition to agriculture, the woodcutter profession was also practiced, for firewood and new construction. Of particular value were the chestnut, walnut and beech tree. “[…]

Between the nineteenth and twentieth century,  the commitment in the countryside became only a support for different profitable professions. The modest incomes and the equally contained dairy production could guarantee the subsistence to the inhabitants only for a few months […]”

But from the mid-1800s to the mid-1900s, the area’s main activity changed. In order to  assess the quality of the rock, various quarries  for the extraction of granite were started  on the slopes of the Sanctuary of Madonna del Sasso. “[…]. The workers assigned to the quarries up to the first World War did not exceed 300 units […] Later, both for the crisis of the market and for the battle waged by the Mayor of Boleto who sees in the continuation of the excavations the endangerment of the Sanctuary, their number decreases. 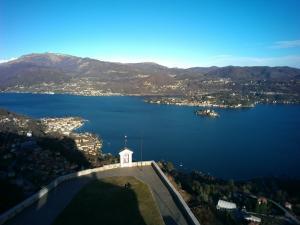 In 1911 and 1923 the Prefect of Novara limited the use of explosives, forcing further work to be reduced. The activity ceased definitively in 1980. […] “a peculiarity of the Municipality is that women had always had a great importance, especially in the Public Administration.  Lucia Bonetta, the first woman to hold the office of Consul in 1776, was from Madonna del Sasso, as well as  Fanny Crespi, the first female Mayor elected in the 50s.

During the Second World War, this territory was one of the most important scenarios of the partisan struggle for the Resistance, which saw commanders then passed into history. Boleto was the headquarters of the Brigade VI Nello, headed by Lieutenant Nello Olivieri, a young man who distinguished himself for his strategic and human skills, killed in an ambush in August 1944.

The sacrifice of many partisans who fell for the freedom of their Homeland is remembered by means of  commemorative tombstones.

Any cookies that may not be particularly necessary for the website to function and is used specifically to collect user personal data via analytics, ads, other embedded contents are termed as non-necessary cookies. It is mandatory to procure user consent prior to running these cookies on your website.